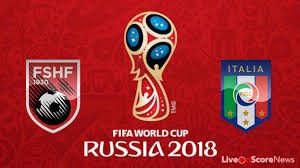 Albania welcomes Italy in a match from Group G of the World Cup qualifiers in Europe.

For Italy this game is without any meaning. The Azzurri already know that they fill finish their campaign at second place, being on 5 points behind the leader Spain with just a game in hand. The Italian team lost the fight for the first place with La Roja, so now they have to prepare for the playoffs. But before that, they have one more game to play.

Meanwhile Albania are third in this group with 13 points. They have one point more than the 4rd Israel and on theory they could lose the third place. But in same time Israel plays against Spain, so it would be surprising if they manage to win against the strongest team in the group.

We could say that it was a good campaign for Albania. From the beginning they knew that they could not do anything better in a group with teams like Spain and Italy. The third place was the best they could hope for and most probably they are going to take it. It was a decent performance by Albania, so there’s nothing to be ashamed of for them.

For Italy it’s dissapointing to lose the battle for the first place, but now they must stop thinking about that and concentrate on what’s about to come. After the game in Albania, Italy must focus on the playoffs. They still don’t know the name of their opponent, but one thing is for sure – they should expect two tough fixture, because nobody wants to lose at this stage of the qualifying campaign. In its last game Italy dissapointed everyone and made a home draw against Macedonia, so they would really need to improve, if they want to travel to Russia next summer.