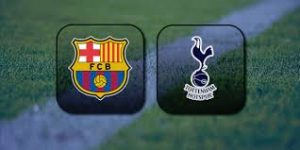 Barcelona welcomes Tottenham Hotspur at the Camp Nou in a game from Group B of the Champions League. This match is like a final for the English side, while for Barca it has no meaning at all. Let’s see why.

Barcelona already won this group and they will finish first. The Catalans are leading the standings with 13 points, having 6 points more than the 2nd Tottenham and the 3rd Inter. For them this match do not have any meaning. This means that Barca’s manager Ernesto Valverde could give a chance to his reserve and young players. This is not good news for Inter, of course, while for Tottenham it’s a great chance to win and finish 2nd in the group.

Many of Barcelona’s stars will get a rest by Valverde for this clash. Most likely we won’t see on the pitch players like Gerard Pique, Jordi Alba, Sergio Busquets, Ivan Rakitic, Lionel Messi and Luis Suarez. This would give a playing chance to players like Cilessen, Miranda, Cuenca, Alena, Puig, Denis Suarez and Munir.

Of course, this is great news for Tottenham. Spurs’ manager Mauricio Pochettino will put his best team on the pitch, hoping to use this fantastic opportunity to beat Barca. Few days ago Pochettino rested Harry Kane and Christian Eriksen against Leicester City, showing everyone that he’s completely focused on the match against Barca.

Tottenham have a slight chance to progress, even if they don’t win against Barca. In the other game in the group Inter are hosting PSV at the San Siro, so Spurs will hope that the Dutch team won’t lose in Milan.

These are our thoughts about the Champions League clash between Barcelona and Tottenham at the Camp Nou. Can Barca do well, even without its stars? Or maybe Tottenham will be too strong for them? Let’s see.