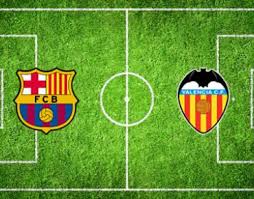 Barcelona hosts Valencia in a match from the 32th round of the Spanish La Liga. Let’s examine this game between these two sides at the Camp Nou in Barcelona.

Barca are on the way to win the league this season. They are unbeaten in 31 matches so far, having 79 points and a record of 24 wins and 7 draws. In their last five games the Los Cules are almost flawless – four wins and a draw against Sevilla.

And although the Catalans are very close to win La Liga, we can say that the mood there is not on the highest level. The reason for this, of course, is the devastating loss against Roma during the week. Barcelona lost with 0-3 at the Stadio Olimpico, which kicked them out from the Champions League. Which was really unexpected after a 4-1 win in the first game.

We can say that this is the most critical moment for the manager Ernesto Valverde since he was appointed from the club. Barcelona are unbeaten in La Liga, but this performance against Roma simply can’t be forgiven.

Some of the club’s fans already want Valverde’s resignation because of this result. It was one of Barca’s worst European nights in the recent years. And a really terrible performance at the Stadio Olimpico.

Valencia on the other hand are on course to return to the Champions League. The Los Che are currently 3rd in La Liga’s standings with 65 points, having one point more than Real Madrid. Valencia’s current record shows 20 wins, 5 draws and 6 defeats. Here’s the moment to say that Valencia won all of their last five matches, proving to be in a great form at the moment. Marcelino’s team is just three points behind the 2nd Atletico Madrid. Can they finish 2nd in the league?