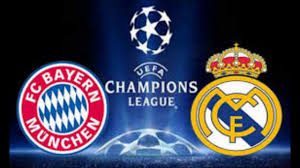 It’s time once again for some incredible Champions League action, because Bayern Munich hosts the titleholder Real Madrid in a first 1/2-final between these two sides. The game is going to be played at the beautiful Allianz Arena in Munich.

When Bayern Munich and Real Madrid meet in the Champions League, these matches always turn out to be a pure classic. It’s always like this when two of Europe’s biggest clubs face each other in Europe’s biggest competition.

The winner of this tie will be a favourite to win the competition as well. Bayern Munich won the Champions League just five years ago, while Real Madrid won it three times in the last four years. This speaks of a serious domination in the tournament.

It’s curious that these two teams met last year as well. Real Madrid eliminated Bayern Munich after some debatable decisions by the referees in both games. Bayern and Real met during the 1/4-finals phase.

Now some things are different. The Los Blancos are still managed by Zinedine Zidane, but now Bayern Munich are with the legendary Jupp Heynckes at helm. Another curious fact is that Heynckes have won the competition with both teams.

Jupp Heynckes is Bayern Munich’s best weapon in this tie. The German manager has tons of experience in the competition and he’s great in tournament battles like this one. One thing is for sure – he’s much more experienced than Zinedine Zidane. He’s also the last manager who led Bayern Munich to Champions League glory, doing it in a spectacular way in 2013.

Of course, this is not just Heynckes versus Zidane. Both teams have some excellent players, so what happens on the pitch is going to depend on them as well.

You just need to watch this Champions League match between Bayern Munich and Real Madrid. Do not miss it, if you love this sport.