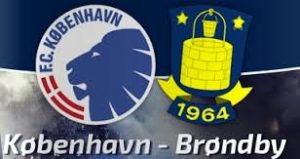 Copenhagen faces Brondby in the final for the DBU Pokalen – The Dannish Cup. The game is going to be played at the Telia Parken in Copenhagen.

Copenhagen are defending the trophy, being able to win it two consecutive times in the last two years. Last year they beat AGF with 2-1 and won it for a 7th time in their history. AGF is the only club who have managed to win the DBU Pokalen more times than Copenhagen – 9.

Brondby on the other hand are going to participate in their first DBU Pokalen final since 2008. They have won the trophy 6 times so far.

In the 1/2-finals phase Copenhagen won against Vendsyssel, beating them with 2-0. In the same time Brondby won with 2-1 against Midtjylland and also reached the final of the competition.

If we look at the head to head stats, things are not looking very good for Brondby. They have not won neither one of their last seven games against Copenhagen. In four of these cases they have lost and in the other three the matches ended with a draw.

During the Superliga season Brondby finished on 12 points behind Copenhagen, but during the Championship round Copenhagen increased their lead to almost 20 points and once again defended their title in the Dannish league. They are arguably the best team in the country right now, so this is making them a heavy favourite to win the DBU Pokalen.

But everyone who watches football knows that finals are very often unpredictable. Brondby are the second best team in Denmark right now, so this makes them a solid contender for the trophy. They have not won it since 2008, so you could be sure that they are going to be very motivated to do it. But could they do it?