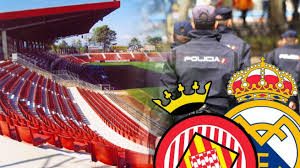 Girona hosts Real Madrid in a game from the 10th round of the Spanish La Liga.

The newcomer Girona currently have 9 points from 9 games played in the league. Their record is two wins, three draws and four losses. In their last game Girona enjoyed a win over Deportivo La Coruna away from home, which allowed them to go up with a few positions in the league.

Real Madrid had some difficulties in the beginning of the season, but now they are in a great run of four consecutive wins in the league. In their last game the Los Blancos enjoyed a comfortable win over Eibar in home. Right now Zinedine Zidane’s team is on 5 points behind the leader Barcelona, so they can’t allow themselves to make any mistakes anymore. Especially in matches like this one.

Against Girona Zinedine Zidane won’t be able to use his starting №1 Keilor Navas, who is out of a few weeks with an injury. Gareth Bale and Mateo Kovacic also remain sidelined for the champions. The good news come from the recovery of Daniel Carvajal, who is once again ready to come back on the pitch.

Both teams had games for the Copa del Rey during the week. Girona suffered a home defeat against Levante, while Real Madrid didn’t face any problems against Fuenlabrada.

Real Madrid are most surely the big favourite in this match. They are in a great run of consecutive wins in the league and they are starting to show everyone that they won’t give up on their title without a fight. Barcelona are looking strong this season and you can be sure that the fight for the title is going to be fierce.

As for Girona, their main goal remains survival in the league for at least one more season.