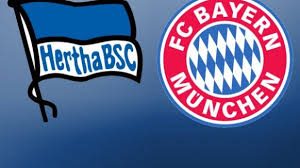 Hertha BSC hosts Bayern Munich in a match from the 6th round of the German Bundesliga. Let’s examine this game in the capital, which is going to be played on Friday night.

Hertha had a very good start of the new season. The Old Lady is currently 4th in the league standings with 10 points won and a record of 3 wins, 1 draw and 1 defeat. The team’s only loss in the league came in the previous round, when Pal Dardai’s boys suffered a 1-3 defeat during the visit to Werder Bremen. Javairo Dilrosun scored Hertha’s only goal in the game, but it was not enough for something more at the Weserstadion.

Before this, Hertha have won three of their four previous matches, beating Nurnberg, Schalke 04 and Borussia M’gladbach.

Far from surprising, Bayern Munich are leading the Bundesliga standings with 13 points won so far. The champions have a record of 4 wins and one draw since the beginning of the season. Bayern’s only mistake so far came in the previous round, when the Bavarians made a surprising 1-1 draw at home against Augsburg. Arjen Robben opened the score for FC Hollywood, but Felix Gotze won a point for Augsburg with a goal in the last few minutes of the game.

For this game Niko Kovac made some changes in his starting line up, making a lot of experiments. This clearly influenced the way the game ended, so now we shall expect to see Bayern’s best eleven on the pitch again.

This is our look at the Bundesliga game between Hertha BSC and Bayern Munich in the capital Berlin. Of course, Bayern are the big favourite here, but keep in mind that Hertha started the season in a pretty positive way. They will not let their opponent win this without some fight.