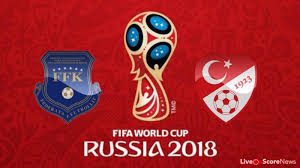 Kosovo hosts Turkey in a game from Group I of the World Cup qualifiers in Europe. The match is going to be played on Sunday night in the city of Shkodër.

These two teams are in totally different positions at the moment. Kosovo are the outsider in the group, being on the last 6th place with just one point won so far. They have scored just two goals in the first five rounds and have conceded 14.

The only point Kosovo have won so far in the group was during the 1-1 draw with Finland in Helsinki.

It’s a different thing for Turkey so far. They are still engaded in a battle for the 2nd place in the group. Currently Turkey are on just two points behind the 2nd team in the group Iceland, so they still have solid chances to guarantee themselves at least a play-off in this group.

But if they want to achieve their goal, they should be flawless in games like this.

Turkey and Kosovo met for the last time in November, when Fatih Terim’s boys crushed their opponents with 2-0 in Antalya. Burak Yilmaz and Volkan Şen scored for the winning team.

It won’t be an easy road for Turkey in their quest to reach the Word Cup in Russia. If we conclude that Croatia are the heavy favourite for the first place, then Iceland, Ukraine and Turkey will fight for the 2nd spot and the right to participate in the play-offs. It’s going to be a really competitive battle, so all of these three teams should be as flawless as possible, if they want to make a step towards the World Cup.

After the game against Kosovo, Turkey will have a difficult visit to Ukraine, so they really need to win this match in Shkodër. Making a mistake there could be fatal for their ambitions.