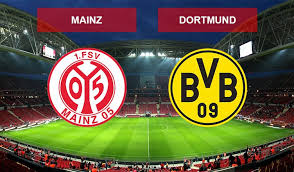 Mainz 05 welcomes the leader in the Bundesliga Borussia Dortmund in a match from the 12th round of the German Bundesliga. Let’s take a look at this clash.

Mainz 05 are 9th in the Bundesliga standings right now with 15 points and a record of 4 wins, 3 draws and 4 losses. Here’s the moment to mention that Mainz are in a good spirit right now, winning their last two games against Werder Bremen and Freiburg. This helped them to seriously improve their position in the standings. Right now they are in a good place to be. Their main goal, of course, is to save themselves from relegation and to stay in the league for just another season.

In their last game Mainz defeated Freiburg with 3-1 away from home at the Schwarzwald-Stadion. Jean Gbamin, Jean Mateta and Karim Onisiwo scored for Sandro Schwarz’ team, securing a 4th win for their team.

Borussia Dortmund on the other hand are once again competing for the title. Lucien Favre’s boys are leading the standings with 27 points won so far, having a record of 8 wins and 3 draws. Right now Dortmund are the only unbeaten team in the league after 11 rounds played.

In their last five matches Dortmund enjoyed four wins and lost points only during the 2-2 draw with Hertha at the Signal Iduna Park. In their last game Dortmund enjoyed a thrillng 3-2 win over the champion Bayern Munich. The result in this match was even, before Paco Alcacer scoring a winner for the current leaders.

That’s our thoughts about the Bundesliga clash between Mainz 05 and Borussia Dortmund. The home team will have a really difficult task against the current leader in the standings. Right now Borussia Dortmund are in a great shape, so they are favourites in this game.