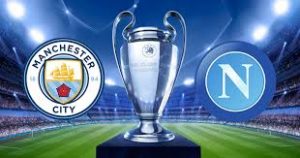 Manchester City hosts Napoli in the big derby of Group F of the UEFA Champions League. The match will be played at the Ettihad Stadium in Manchester.

We can easily say that these are two of the teams in top form in Europe right now. They are both leading the standings in England and Italy, which speaks a lot of their ability and current form. This is what makes this game on Tuesday night so interesting.

Manchester City are enjoying a terrific form since the start of the new season. Last season Pep Guardiola’s team didn’t win a single trophy, but now The Citizens are just scary with their performance. During the weekend Manchester City scored 7 goals against Stoke City in the Premier League, proving once again to be a major force since the start of the new campaign. It’s not surpising that at this moment they are almost everyone’s big favourite for the title in the Premier League.

But Napoli are not less impressive than City. Maurizio Sarri’s team is perfect in Italy so far – 8 wins from 8 games played. During the weekend Napoli put another impressive performance, beating one of its big rivals Roma at the Stadio Olimpico in Rome.

In the Champions League Napoli have not been as perfect, though. They have lost their first game against Shakthar, but they fixed their mistake against Feyenoord. Winning points against the big favourite in the group Manchester City could be in big favour for them in the fight for reaching the next phase of the competition.

One thing is for sure – we shall expect offensive and attacking football at the Ettihad. Manchester City and Napoli are not teams who like to defend, so most probably we will see them looking for goals. Which is a great thing for the audience.