The champion Manchester City hosts Southampton in a game from the 11th round of the English Premier League.

Manchester City are leading the Premier League standings with 26 points. This is the same amount of points which Liverpool have as well, but the Cityzens have a better goal difference. This allows them to be on top after the first 10 rounds.

Right now City have a record of 8 wins and 2 draws. Since their draw against Liverpool at the Anfield, Pep Guardiola’s boys won against Burnley and Tottenham. For most pundits, the Cityzens remain favourites to win the Premier League title for a second consecutive year.

In their last game Manchester City celebrated a tough, but very important 1-0 win over Tottenham at the Wembley. The only goal in the game was scored by the Algerian star Riyad Mahrez in the first half. In the end of the game Tottenham had a very good chance to equalize, but Erik Lamela missed from a clear position. 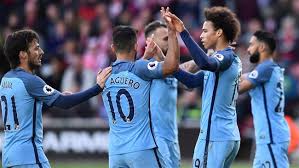 Southampton are 16th in the Premier League standings with 7 points won so far. The Saints have a record of 1 win, 4 draws and 6 defeats since the start of the season. As it looks right now, Mark Hughes’ team will have a tough task against the current champion in the league.

In their last five games Southampton are without a win. They suffered three losses and made two draws, including against Newcastle United in the previous round. The Saints hoped to win at the St. Mary’s, but the game against Rafa Benitez’ team ended with a 0-0 draw.

That’s what we had to say about the Premier League clash between Manchester City and Southampton at the Etihad. Of course, the Cityzens are the big favourites here. Can Southampton cause an upset?