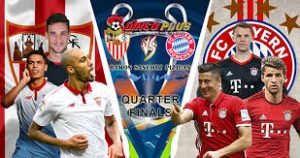 One of the big favourites to win the Champions League Bayern Munich travels to Andalusia to meet Sevilla in a first 1/4-final clash between these two sides.

With Jupp Heynckes bringing Bayern back to their best, the Bavarians are a strong contender to win the competition for a first time since 2013. It’s curious to note that when Bayern won the Champions League for a last time, it was once again Jupp Heynckes who was leading them. The experienced manager replaced the sacked Carlo Ancelotti and he’s showing some amazing work with the side.

With Ancelotti Bayern looked a little bit shaky and they even suffered a huge defeat to PSG in Paris. But since Jupp Heynckes took the helm, Bayern are looking stronger than ever.

For Sevilla this is another opportunity to do something incredible in their history. Vincenzo Montella’s team surprised a lot of people with eliminating Manchester United in the 1/8-finals. The Red Devils underrestimated the Spanish side and they paid the price. You can be sure that now Bayern Munich will try to not repeat the same mistake.

What happened to Man United is a proof that every team can be beaten, if its opponent shows its best qualities and have its day. After enjoying such a win, Sevilla won’t be afraid of Bayern Munich. They will try to get the best possible result at the Estadio Ramon Sanchez Pisjuan, because we all know how difficult it is to play at the Allianz Arena in Munich.

As for Bayern, they know that they are the better team. But it’s not enough to know it, you must show it as well. The Bavarians will have to avoid Manchester United’s mistake and give their best against Sevilla. If they don’t do it, they will have problems.