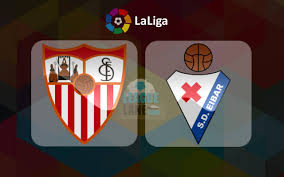 Sevilla welcomes Eibar in a match from the 23th round of the Spanish La Liga. Let’s take a look at this clash at the Estadio Ramon Sanchez Pizjuan in the Andalusian capital.

Sevilla are fighting for another Champions League qualification. Right now Los Rojiblancos are 4th in the standings with 36 points, having 4 points advantage in front of the 5th Getafe. So far in the league Sevilla have a record of 10 wins, 6 draws and 6 losses. In their last five games the Andalusians won only once though – against Levante. They also suffered three defeats, which is telling us that they are not in their best form at the moment.

Sevilla’s last game in the league ended with a loss. Machin’s boys were beaten by Celta at the Balaidos. The game in Vigo ended with a 1-0 win for Celta, thanks to a winning goal from Okay Yokulu in the second half. For Sevilla this was a third defeat in the last four matches – pretty bad really.

Eibar on the other hand are 10th in La Liga with 29 points. They have 7 wins, 8 draws and 7 losses. In their last five games Eibar lost only once – against Barcelona at the Camp Nou. They also won twice and made two draws.

Eibar’s last game ended with success. Mendilibar’s boys beat Girona with 3-0 at home, thanks to goals from Ruben Pena and two from Charles.

For Eibar this position in the table is more than good. Their primary goal is to be safe from relegation, so they are in a pretty good place right now. As for Sevilla, they have to do some effort in order to keep their place in the Top 4.

That’s our view on the La Liga clash between Sevilla and Eibar at the Ramon Sanchez Pizjuan.