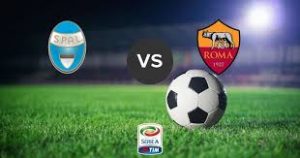 SPAL welcomes Roma in a match from the 34th round of La Liga. Let’s have a look at this match.

SPAL continue to fight against relegation. They are currently 17th in La Liga with 29 points, having just one point more than the 18th Crotone. As it stands right now, it shall be a very interesting fight for survival between these two teams. For now SPAL have a little bit of advantage in terms of points.

SPAL have a record of 5 wins, 14 draws and 14 defeats. SPAL are the team with the most draws in the Serie A right now, alongside Udinese. In their last five games SPAL made five draws in a row, which is another proof that this club just loves to make draws.

In the last round SPAL made a 0-0 draw against Chievo at home. Before this they shared the points with Fiorentina, Atalanta, Genoa and the champion Juventus.

Roma on the other hand are also currently engaged in a fight – a fight for a Top 4 finish and qualification for the Champions League.

Right now the Wolves are 3rd in the Serie A with 64 points, being on par with the 4th Lazio. The 5th Inter have just one point less than the two clubs from the capital.

Roma’s record in the Serie A shows 19 wins, 7 draws and 7 defeats. In their last five games Eusebio Di Francesco’s boys won twice, made two draws and lost once – against Fiorentina. In the previous round Roma enjoyed a difficult, but important 2-1 win against Genoa at home.

Roma are currently 1/2-finalists in the Champions League, but it doesn’t mean that they are going to neglect the Serie A. They need to finish in the Top 4 and they know. And they will accept only a win against SPAL.