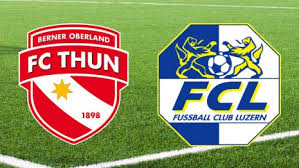 Thun faces Luzern in a match from the 2nd round of the Swiss Super League. Let’s examine this match and see what’s going on here.

Thun started their season in the worst way possible – with a loss. Marc Schneider’s boys suffered a 1-2 defeat during the visit to Zurich. Dejan Sorgic scored a goal for Thun at the end of the game, but Marco Schönbächler and Adrian Winter’s goals for Zurich were enough for the home team to clinch the win.

Meanwhile Luzern also started the new campaign in the Super League with a loss. They suffered a 0-2 defeat against Xamax in the opening round at home ground. Rene Weiler’s boys showed a total desperation in front of goal, being unable to score. Against Thun Luzern will look for their first goal in the Super League for the new campaign. The team’s main striker Ruben Vargas had some chances to shine against Xamax, but in general he was kept quiet by the visiting team’s defense.

Last season Thun finished 7th in the Super League, being pretty average with a record of 12 wins, 6 draws and 18 defeats. If they can do better this season, it’s going to be pretty good for them. But the beginning of the new season was not very promising for them.

As for Luzern, last season they finished 3rd in the league and qualified for the Europa League. It was a good campaign for them and they will try to do it again. Luzern know that they can’t compete with the two giants Young Boys and Basel, but they can be “the best from the rest”. Although they also started the new season with a loss.

We believe that Luzern are the better team here and they will record their first win in the Super League, although play away on Thun’s ground.