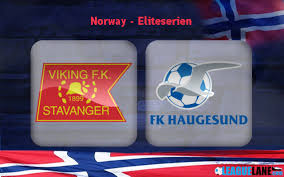 Viking hosts Haugesund in a match from the 14th round of the Norway’s Eliteserien division. The match is going to be played at Sunday night at the Viking Stadion.

Viking are currently the weakest team in the Eliteserien since the start of the new season. They have won just 8 points in the first 13 games, being on the last place in the standings. They have lost 9 of their 13 games so far and they have won just 2. So far they look like a solid contender for relegation, except if they do not start improving very soon.

As for Haugesund, they are currently positioned in the middle of the table with 18 points being won. Lately they are doing good, having won two consecutive games against Aalesund and the champion Rosenborg.

If we take a look at the head to head record, we will see that the matches between these two sides are competitive. At least in the last few occasions. Haugesund won three of the last six games with Viking, while Viking won two of them. For the last time Haugesund and Viking met in February and the match ended with a 2-2 draw.

Last year Haugesund finished the season at 4th place, being close to the Top 3 and the Europa League zone. They will want to improve this position, but they need to start winning on more regular basis, if they want to do it. So far they are performing much more as a middle table team.

Viking on the other hand are suffering an unexplainable dip of form this year. Last season they finished in the middle of the table, but right now their season is a pure disaster. If they don’t start improving as soon as possible, they could lose their place in the Norway’s elite division.