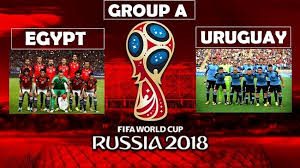 Egypt faces Uruguay in a second match from Group A of the FIFA World Cup in Russia. Let’s see what’s going on here in our betting reviews for this clash.

This game is going to be played at the Ekaterinburg Arena in the city of Ekaterinburg. Uruguay are the big favourite to win the first place in the group, but Egypt are not to be underrestimated. After all, they have a player like Mohamed Salah in their team, which means a lot for their confidence and overall quality.

Uruguay on the other hand will rely on their star duo in attack. Barcelona’s Luis Suarez and PGS’ Edinson Cavani are capable to the defense on any team on Earth. Having players like this means that Uruguay are a team which will try to reach the knockout phase of the competitions and do as good as they can there.

During the qualifications in the South America region, Uruguay finished second, just after the leader Brazil. They are in some good shape at the moment, so it’s not surprising that they are the number one favourite for the first spot.

Egypt on the other hand reached the World Cup for a first time since 1990. For the Pharaohs this was a long awaited return to the world’s most prestigious competition.

The main man in Egypt’s squad is clearly Liverpool’s superstar Mohamed Salah. The winger made a spectacular season for the Reds and he’s ready to shine at the World Cup as well. Other players we have to mention are Arsenal’s Mohamed Elneny and Huddersfield Town’s Ramadan Sobhi. These players have experience on top level and the Pharaohs will rely on them.

These are our betting reviews for the World Cup clash between Egypt and Uruguay. La Celeste are favourites here, but be careful with the egyptians.